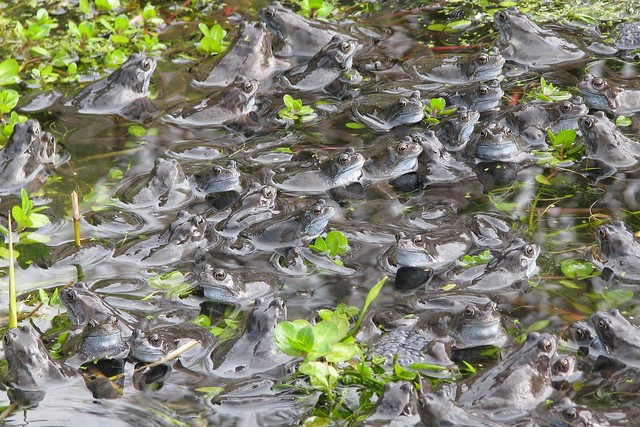 1 Then the LORD said to Moses, “Go in to Pharaoh and say to him, ‘Thus says the LORD, “Let my people go, that they may serve me. 2 But if you refuse to let them go, behold, I will plague all your country with frogs. 3 The Nile shall swarm with frogs that shall come up into your house and into your bedroom and on your bed and into the houses of your servants and your people, and into your ovens and your kneading bowls. 4 The frogs shall come up on you and on your people and on all your servants.”‘” 5 And the LORD said to Moses, “Say to Aaron, ‘Stretch out your hand with your staff over the rivers, over the canals and over the pools, and make frogs come up on the land of Egypt!'” 6 So Aaron stretched out his hand over the waters of Egypt, and the frogs came up and covered the land of Egypt. 7 But the magicians did the same by their secret arts and made frogs come up on the land of Egypt.

8 Then Pharaoh called Moses and Aaron and said, “Plead with the LORD to take away the frogs from me and from my people, and I will let the people go to sacrifice to the LORD.”

9 Moses said to Pharaoh, “Be pleased to command me when I am to plead for you and for your servants and for your people, that the frogs be cut off from you and your houses and be left only in the Nile.”

10 And he said, “Tomorrow.” Moses said, “Be it as you say, so that you may know that there is no one like the LORD our God. 11 The frogs shall go away from you and your houses and your servants and your people. They shall be left only in the Nile.”

12 So Moses and Aaron went out from Pharaoh, and Moses cried to the LORD about the frogs, as he had agreed with Pharaoh. 13 And the LORD did according to the word of Moses. The frogs died out in the houses, the courtyards, and the fields. 14 And they gathered them together in heaps, and the land stank. 15 But when Pharaoh saw that there was a respite, he hardened his heart and would not listen to them, as the LORD had said.

20 Then the LORD said to Moses, “Rise up early in the morning and present yourself to Pharaoh, as he goes out to the water, and say to him, ‘Thus says the LORD, “Let my people go, that they may serve me. 21 Or else, if you will not let my people go, behold, I will send swarms of flies on you and your servants and your people, and into your houses. And the houses of the Egyptians shall be filled with swarms of flies, and also the ground on which they stand. 22 But on that day I will set apart the land of Goshen, where my people dwell, so that no swarms of flies shall be there, that you may know that I am the LORD in the midst of the earth. 23 Thus I will put a division between my people and your people. Tomorrow this sign shall happen.”‘” 24 And the LORD did so. There came great swarms of flies into the house of Pharaoh and into his servants’ houses. Throughout all the land of Egypt the land was ruined by the swarms of flies.

25 Then Pharaoh called Moses and Aaron and said, “Go, sacrifice to your God within the land.”

28 So Pharaoh said, “I will let you go to sacrifice to the LORD your God in the wilderness; only you must not go very far away. Plead for me.”

29 Then Moses said, “Behold, I am going out from you and I will plead with the LORD that the swarms of flies may depart from Pharaoh, from his servants, and from his people, tomorrow. Only let not Pharaoh cheat again by not letting the people go to sacrifice to the LORD.”

30 So Moses went out from Pharaoh and prayed to the LORD. 31 And the LORD did as Moses asked, and removed the swarms of flies from Pharaoh, from his servants, and from his people; not one remained. 32 But Pharaoh hardened his heart this time also, and did not let the people go.

The wonders that the Lord is sending upon Egypt continue.  The first plague was the Nile being turned to blood.  In Exodus 8 we have plagues 2, 3, and 4: frogs, gnats (or lice, the Hebrew word can mean either), and flies.

In this part of the Scripture we have already seen the theme of Pharaoh’s hardness of heart, decreed by God and lived out in Pharaoh’s words and behavior.  It is not as if God is making Pharaoh behave in a way that he does not want to.  This continues in chapter 8.  Three more times does Pharaoh harden his heart.  In each case in this chapter, the way that Pharaoh hardens his heart is unique.

He deceives Moses when the frogs are everywhere, saying that once Moses prays, and the frogs are gone, he will let the people go.  He changes his mind and hardens his heart.  Then when the gnats (or lice) are on all the people and animals his magicians tell him, “This is the finger of God.”  Now he doesn’t listen to his magicians and his heart was hardened.  Then, when the flies are everywhere, he tries to make a deal with Moses and says that he will let the people go a little way if Moses prays and the flies are removed.  Moses does and the flies vanish and Pharaoh hardens his heart and does not let the people go.  Pharaoh lies after he is warned not to.  We see Pharaoh as a stubborn liar.

But there is a second and more significant theme that comes to the fore in this chapter.  God triumphs over all the powers of Egypt, their Pharaoh, their magicians, and their gods.  God had already shown His power over the snake goddess Wadjet and the gods of the Nile River; Osiris, Nu, and Hapi (who is no longer happy!).  Now the Lord is triumphant over the frog god Hequet (all the magicians can do is make more frogs when they are already everywhere), the earth god Geb when the dust is changed into gnats or lice, and the bug god Kepher.

The plagues move into new territory when the magicians (who are priests of the gods of Egypt) declare that they can no longer compete with Moses’ God.  The regional gods of Egypt, each with their realm of power, are no match for the Almighty God named Yahweh.

Today, consider the power of God.  How should His omnipotence influence your life?